A new UN report will set out a stark message on the state of the climate crisis, adding pressure on governments meeting for crucial COP26 talks in the fall.

The report from the United Nations’ Intergovernmental Panel on Climate Change (IPCC) published tomorrow is the first part of a review of current scientific knowledge about how the world is warming due to human activity.

It’s the first such global assessment since 2013, when scientists found that global warming was “obvious” and that the human impact on climate was clear, with it highly likely that most of the warming since the 1950s is due to human activity.

The message in the latest report is expected to be even stronger, with warnings about how close to 1.5°C global temperatures will rise above pre-industrial levels – a limit that nations have pledged to try to avoid due to the grave consequences for humanity.

Drawing on more than 14,000 scientific papers, the review is set up to provide the latest knowledge about past and possible future warming, how humans are changing the climate and how this is increasing extreme weather events and driving sea level rise.

An approved summary report is published in a process involving scientists and representatives of 195 governments that has taken place online over the past two weeks.

This means that governments have signed off on the results – and there will be pressure on them to take more action at global climate talks known as Cop26 that will take place in Glasgow in November.

One of the scientists involved in the process, Professor Piers Forster, from the University of Leeds, said:

This report will be able to say a lot about the extremes we are going through today and it will be able to be conclusive that our greenhouse gas emissions are causing them and will only get worse.

“The report will bring a lot of bad news about where we are and where we are going, but there will be nuggets of optimism out there that I think are really good for the climate change negotiations,” he told LBC Radio.

“The first is that if we can really get our efforts together to reduce greenhouse gas emissions over the next 10 year time frame and reach the net-zero targets everyone is talking about, there is a good chance that we will try to keep long-term temperatures below 1.5 degrees. “

Tomorrow’s report is the first part of the sixth global assessment of climate science to be undertaken since the formation of the Intergovernmental Panel on Climate Change in 1988.

It examines the physical sciences of climate change, with other parts of the review covering impacts and adaptation to climate change, and solutions to the crisis, to be published in 2022.

The report comes as global temperatures have risen to 1.2 degrees Celsius above pre-industrial levels, and more extreme weather – from record heat waves and wildfires to torrential rains and devastating floods – is hitting countries around the world.

Despite the growing specter of climate change, governments are not taking enough action to tackle greenhouse gas emissions from human activities such as burning fossil fuels for heating, transportation and energy supply to limit rising temperatures.

READ  The Romanian vaccine deal is finally complete, and 700,000 doses will be delivered next month

UN climate chief Patricia Espinosa warned that many countries have not submitted new action plans to cut their emissions – a key part of what they need to do before the COP26 climate summit – and those who have not done enough.

A special report issued by the Intergovernmental Panel on Climate Change in 2018 warned that exceeding the 1.5°C limit would mean more extreme weather, greater sea level rise, and damage to crops, wildlife and health.

She said limiting rises to 1.5 degrees Celsius would require cutting carbon emissions by 45% by 2030, on the way to reducing them to zero overall by 2050, with major changes in transportation, how homes are heated and electricity is generated, and industry and agriculture. 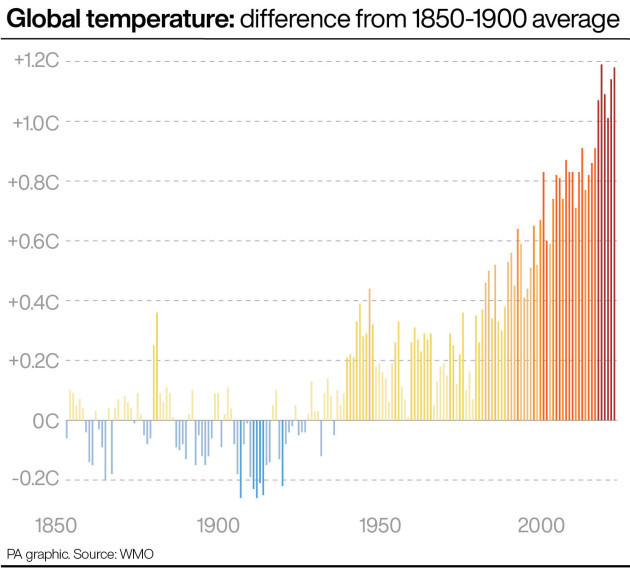 Ahead of the publication of the new assessment from the IPCC, Richard Black, Senior Associate at the Energy and Climate Intelligence Unit, said: “Coming just before Cop26, this report is a huge wake-up call for all governments that have not yet put forward realistic plans to reduce climate change. emissions over the next decade.

It will show that the choices made now have a major impact on our future – leading to a runaway world of wild weather effects and incalculable dangers on the one hand, and on the other hand to a future in which climate change is constrained within manageable limits.

Doug Barr, chief scientist at Greenpeace UK, said: “Over the past decades, scientists have done an amazing job warning of the effects of the climate crisis, and world leaders have done a terrible job of listening.

This year, that should change. We don’t need more pledges, commitments and targets – we need real action here now to cut greenhouse emissions as quickly as possible, phase out fossil fuels, transform our food system, and provide more money to the countries most affected by it. climate crisis.

“In recent weeks we have seen heat waves in North America and floods in India, Europe, China and London,” warned Frederic Ngeho, Christian Aid’s Senior Advisor for Climate Change and Energy for Africa. “We have experienced in Africa the devastating nature of the climate emergency.”

“Whether it’s Cyclone Idai, changing rainfall patterns or rising temperatures, Africa has been waiting for the rest of the world to catch up and take action on climate change for years.

“The important thing now is that the governments of the rich world make up for lost time and act quickly to reduce emissions and deliver the promised financial support to the weak.”