People leave the village of Limni in Evia to be rescued from the fire by ferry.

Thousands of people have fled wildfires raging out of control in Greece, including a major fire north of the capital Athens that killed one person.

Multiple evacuation orders were issued for populated areas on the mainland and the nearby island of Evia, while a fire near Athens burned forests and homes on its way toward Lake Marathon, the capital’s main reservoir.

“We continue our hour by hour efforts to tackle the multiple fires we face today,” said Mr. Hardelis. “The conditions are very dangerous.”

Winds blew this afternoon in many parts of Greece, increasing the risk of fires. 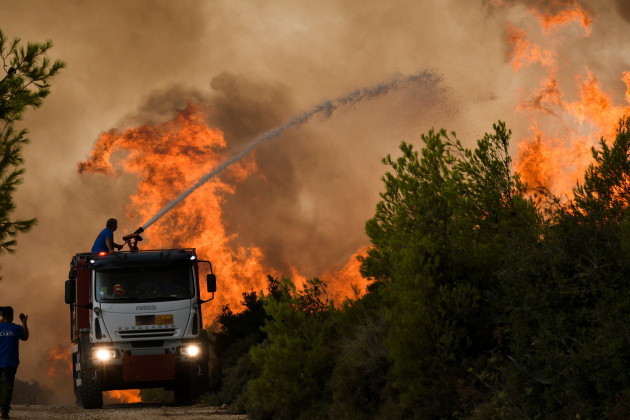 A firefighter tries to put out a fire as volunteers hold a hose during a massive fire in Agios Stefanos.

Athens’ main trauma hospital said a 38-year-old man died after sustaining a head injury from an utility pole in Ipocrateos Politia, one of the neighborhoods north of Athens affected by the fire.

Dozens of villages and other neighborhoods in the southern Peloponnese region and just north of the Greek capital have been emptied as fires burn through the pine forests.

“We’re talking about the end of the world, and I don’t know how to describe it,” Sotiris Danikas, head of the coast guard in the town of Edipsos in Evia, told state radio ERT, describing the naval evacuation.

The Coast Guard said 668 people were evacuated from beaches in northeastern Evia early this afternoon after the fire cut off all other means of escape. Coast Guard ships continued to patrol the coast.

A Coast Guard vessel also rescued 10 other people who were trapped ashore by another fire near the town of Gythio in the southern Peloponnese region.

Greek and European officials have blamed climate change for the multiple fires that have raged in parts of southern Europe, from southern Italy to the Balkans, Greece and Turkey.

The United Nations’ Intergovernmental Panel on Climate Change said global warming has caused an increase in the intensity and frequency of extreme weather events.

The world’s temperature has already risen by about 1°C since pre-industrial times due to human activity, and the UN’s Intergovernmental Panel on Climate Change has warned that this is likely to exceed 1.5°C between 2030 and 2052 if the increase continues at the current rate. .

Not only did the temperature change: there were also changes in precipitation, retreats in snow and ice, and increases in sea level as the oceans warmed.

This year, Greece suffered its most protracted heatwave in three decades, with temperatures soaring to 45 degrees Celsius. 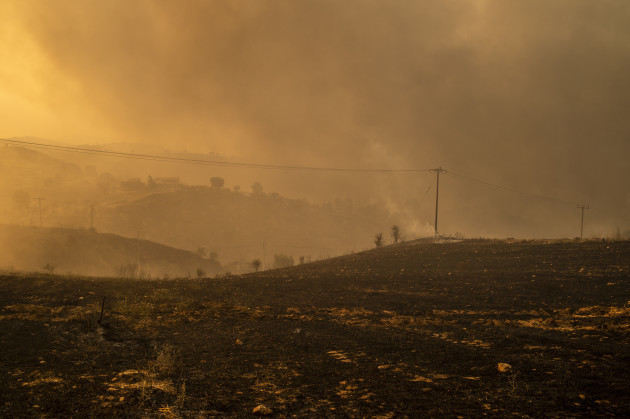 Smoke rises from a scorched earth in a wooded area north of Athens.

Thousands fled their homes and vacation accommodations, while at least 20 people, including four firefighters, were treated for injuries. Two firefighters were in intensive care in Athens, while two others suffered minor burns.

Firefighters went door to door in areas about 12.5 miles north of Athens asking people to evacuate, while helicopters dropped water on towering flames and thick smoke blanketed the area.

Authorities sent alerts to mobile phones in the area urging residents to leave, while a refugee camp on the outskirts of the capital was evacuated overnight.

The constant blaze, which threatened populated areas, hampered the work of hundreds of firefighters there.

The fire halted traffic on the country’s main highway linking Athens with northern Greece and damaged electricity installations. The power distribution company has announced a cycling outage in the wider metropolitan area to protect the electrical grid.